Good genes? How can Trump eat a lot of fast food, exercise little and be healthy?

The White House physician maintained President Trump is in “excellent health” Tuesday, despite what a new book describes as his strong attraction to fast food, including cheeseburgers in bed.

Ronny Jackson, the White House physician, said the 71-year-old Trump stands 6 feet, 3 inches tall and weighs 239 pounds. He also said Trump has “above average” exercise capacity, even though he doesn’t exercise beyond golf.

That height and weight gives Trump a body mass index (BMI) of 29.9 which places him in the overweight category on the verge of obesity, defined as a BMI of 30 or greater.

So how is he so healthy?

“Incredible genes, i just assume,” said Jackson, who said he told Trump that if he ate better and exercised for the last 20 years he “might live to be 200.”

While Trump’s may be the dream diet of a teenage boy, it’s a nightmare for those trying to model or message that healthy eating — and exercise — are the key to good health.  Tyson’s Corner, Va. internal medicine doctor Sam Pappas faced that dilemma the same afternoon Jackson was explaining Trump’s health data to the press.  A 50-something male patient described his “very Trumpesque” approach to diet and exercise during a follow up to his own physical as if it was okay.

Pappas, who frequently performs physicals for government and military personnel, said he had to remind his also-stocky, muscular man that unlike the teetotalling Trump “you like to have your wine.”  As with his own patient, Pappas said he would encourage lower Trump to eat lower carbohydrate diet with more healthy fats.

Indeed, Jackson is going to work with Trump and a nutritionist on the president’s diet which will emphasize lower carbs and fats.

“There are ‘good’ genes, but what research has shown us is that more than genes, more than health care, more than social circumstances, behaviors are the leading cause of premature death,” says Bernadette Melnyk, a professor and dean of Ohio State University’s college of nursing and the university’s chief wellness officer. “And there’s good evidence behind that.” 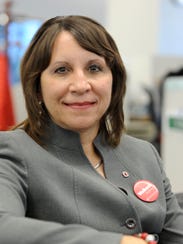 Bernadette Melnyk is chief wellness officer at Ohio State University, where she is also a professor and dean of the college of nursing. (Photo: Tim Loehrke, USA TODAY)

After all, one’s genes can only do so much.

“Some gene variants are slightly more efficient at detoxifying harmful chemicals in the liver, which leads to a slightly decreased cancer risk,” says Maureen Murphy, a cancer geneticist with the Wistar Institute in Philadelphia. “But I don’t think good genetics trumps —  I mean beats —  bad lifestyle.”

Trump’s supporters emphasize that the fact he’s never been a smoker or drinker is key to his good health, but most experts say diet and exercise are still critical to good health and longevity.

Still, Pappas says Trump’s triglycerides level (the amount of fat in the blood) of 129 is good, his blood pressure of 122/74 is “very good” and his blood glucose level of 89 is “a very good marker” as it’s under 90. Above 90 is pre-diabetes.

Pappas also says government physicals, including Trump’s, don’t have as much data as he would like, such as waist measurement which would be a better indicator of problems than BMI for someone with a muscular build like Trump. Jackson said the physical did not include body measurements.

We are located at